The Backstory on my First "Blink Book Review"

I must admit I never had FOMO about Hootie and the Blowfish back in the day. I had missed their rise as a popular band on the college bar and frat circuit by about four years. By the time they were selling millions of records and playing sold-out arenas, I was in my country music/NPR phase. At that point, I was living in DC and oblivious to the meteoric rise of this local music phenomenon.

Over the years, "cracked rear view" (title intentionally in lower case from the album cover:) and "Fairweather Johnson" somehow ended up in my iTunes – likely the result of trading around CDs among friends. That’s about the only reason I knew any of their songs.

My epiphany about Hootie and the Blowfish came a generation after their chart-topping fame. A year or so before their 2019 reunion tour, my friend, singer-songwriter Danielle Howle, was performing a house concert in my living room. She asked if I was OK with her bringing a friend to play in with her. I told her it was her show – we’d welcome whomever she brought.

When I realized the friend was Mark Bryan, I was kind of excited that a Hootie band member would be playing in my house (although I must admit that, at the time, I couldn't remember which instrument he played, but still …).

Mark and Danielle – as longtime friends and music collaborators – put on an amazing show for the 30+ people in my living room. They played some of the originals they’d worked on together. He played a few new songs he was working on. That’s when I realized I might have missed some musical magic along the way. 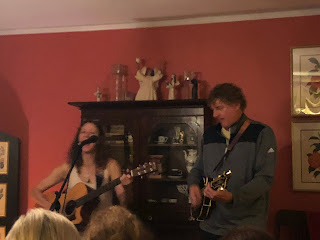 I ended up attending one of the 2019 Hootie reunion concerts with my 30-year-old goddaughter. We both agreed it might be the best concert either of us had ever attended. Walking into the concert, I was a curious onlooker. Walking out, I’d become a full blown 1990s fan girl. I went home and immediately downloaded the rest of their albums. This year for Christmas, my husband gave me a signed "cracked rear view" album he out-bid several people on at an auction.

All this backstory to say, this late-to-the-party fan girl bought the recently released book, “Only Wanna Be With You,” that tells the story of the band. I read it all over the Memorial Day week-end. It's my first Blink Book Review. Read it here. 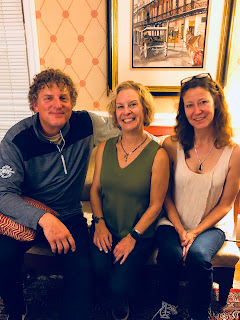 Reba
I've always got words shooting out of the ends of my fingers, and this blog is my attempt to put some order to the random connect points that result when my fingers hit the keyboard. Like many things in life, the blog may be a little messy in places, so just ignore that like you would a pile of clothes on the floor. Email me at rebahcampbell@gmail.com. I tweet @rebahcampbell and @randomconnectpoints. And I'm on Instagram: random_connect_points