Everyone has “that dream.” You know the one that lives in your heart rather than your head. For most of us, it’s a dream we logically know in our heads will never come true. But we keep it tucked in a place our hearts that holds on to possibilities - being an astronaut, wining a Pulitzer Prize, touring with the Grateful Dead. They are fun fantasies, but we don’t invest a lot of time pursuing them knowing the slim possibility of their reality.

But it’s still fun to envision myself in front of hundreds of people … sassy cowboy boots, tight jeans, glittery top, pouffed up hair, guitar strapped around my neck, belting out with a voice that combines the best of Dolly Parton, Loretta Lynne and Mary Chapin Carpenter.

Sometimes those dreams do come true - they just might just show up packaged a little differently than planned.

For me…
It wasn’t Nashville's Grand Old Opry. It was Columbia's Music Farm.
It wasn’t a guitar strapped around my neck. It was a yellow ukulele.
It wasn’t the voice of Dolly, Loretta and Mary Chapin. It was my screechy voice smoothly folded into the cacophony of the moment knowing the fact I couldn’t sing didn’t matter a bit.
I’ve recently stumbled into a whole new world of ukulele culture thanks to a friend who got me hooked up with a group of ladies who meet “kind of weekly” for a “Sip and Strum.” Over the past year, we’ve strummed with moms and grandmothers, an artist, lobbyists, a tv producer, a Pilates instructor and even one good-sport man thrown in. We range in age from 30s to 70s. We live all over town. Our musical talent spans from none to lots. 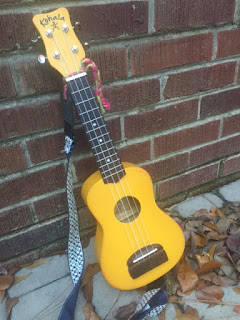 We meet at Row Gallery on Millwood where creativity oozes from the walls. We sit in a circle, sip on wine and learn the basics from a delightful angel of a singer named Jessica. She is a voice teacher at Freeway Music that puts on our Sip and Strum. Plus, she’s half of my favorite local duo, Prettier Than Matt. She patiently teaches us, simple chord by simple chord, to play fun songs ranging from “Sweet Caroline” to “Shake it Off” and “Pretty Little Birds” to “These Boots are Made for Walking.” If only my childhood piano teacher had used this approach. 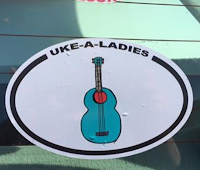 Over the months, we learned chords, strum patterns and tuning. We made uke straps out of yarn. We played “Shake it Off” in the St. Patrick’s Day parade. We named ourselves the Uke-a-ladies. We have t-shirts and oval stickers. We’ve created a little tribe.

So when the time came for the music school’s anniversary showcase for all its students, several of us were game to give it a try. Our Uke-a-ladies were assigned Journey’s “Don’t Stop Believing.” A couple of us rehearsed together, but there wasn’t a lot of preparation. Six of us arrived at the Music Farm on a recent Sunday afternoon excited but a little nervous.
If there is such thing as musical pixie dust, Freeway Music gave it away at the door that afternoon to scatter generously over the Music Farm. The air was electric. The tight blue hallway leading up to the stage served as the green room for the performers. We laughed that we had no privacy for hair and make-up, no place to change into our sassy costumes or to stow our gig bags. Noise was so loud it was impossible to hear ourselves get tuned. But we were ready!
We hustled on stage stepping over electrical cords careful not to knock over a mic or a light stand. Led by Jessica, whose uke was the only one plugged in, we were playing “back-up” to a teen vocalist and several others on guitar, trumpet, bass and drums. 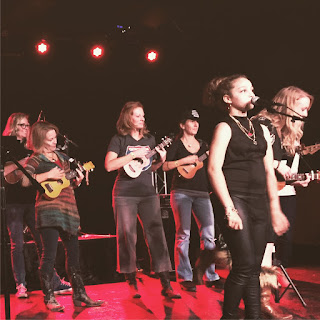 I was ready - feeling pretty confident that I had our song memorized. I wasn’t even concerned about whether I could see the music stand with our cheat sheet on it (not that I could have seen it without my glasses anyway, and there was no way I was going to blemish my stage debut with specs perched on the end of my nose).
It was the fastest six minutes of my life. Once I heard that first D chord I was in the zone. I knew I wasn’t the center of attention, so I knew it wouldn’t mess anyone up if I missed a chord or two. Who cared if I was a middle-aged uke-playing wanna be?
By about minute two, I was tapping my foot then swaying with the music. I felt my smile grow big. My fingers danced over the strings sliding through the chord changes without any help from my head. How in the world did that happen, I later wondered. Just a few hours earlier, I was plodding through practicing my chords, repetition after repetition.
For six minutes, I was in the band, part of a community just making music. I was living that dream. 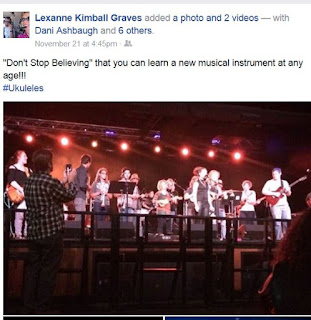 We played Journey’s “Don’t Stop Believing” … a staple of my high school years. But new meaning infused as one of my Uke-a-lady friends observed later: “This shows you don’t stop believing you can learn to play an instrument at any age.”
I’d add to that don’t stop believing in a dream you thought could never come true – it might just show up on a different stage in a different outfit - but it’s living the dream nonetheless. 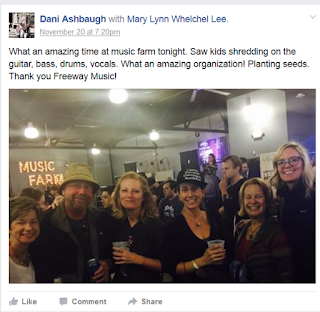 If you are really brave, watch the performance here on Facebook.

Reba
I've always got words shooting out of the ends of my fingers, and this blog is my attempt to put some order to the random connect points that result when my fingers hit the keyboard. Like many things in life, the blog may be a little messy in places, so just ignore that like you would a pile of clothes on the floor. I tweet @rebahcampbell @randomconnectpoints On Instagram: random_connect_points